Most people see rats only as villains; most often used in horror movies to create the ambience of creepy and eery feelings. In general they have mostly received bad press. When you get to know rats, however, they are the most wonderful creatures and even from the perspective of plant lovers and those interested in the world of scent they have much to offer.

Our beloved family rat, Ebony, died. She was such a beautiful, intelligent and loving rat. We will miss her so much. It is amazing how one creature can change your entire view of a specie. The love for something always brings you knowledge. When you love something you are always drawn to enquire more which is why the ancient Egyptians called true knowledge “intelligence of the heart” – Sia. Love induces you to reach out in a gesture of wanting to understand and in that reaching out through love, knowledge is gained that would have remained in obscurity if it wasn’t for the object of your love. Now, whenever I see a rat, I feel a tug on my heart strings, in the memory of her, and in gratitude for enriching our lives with her gentle presence. 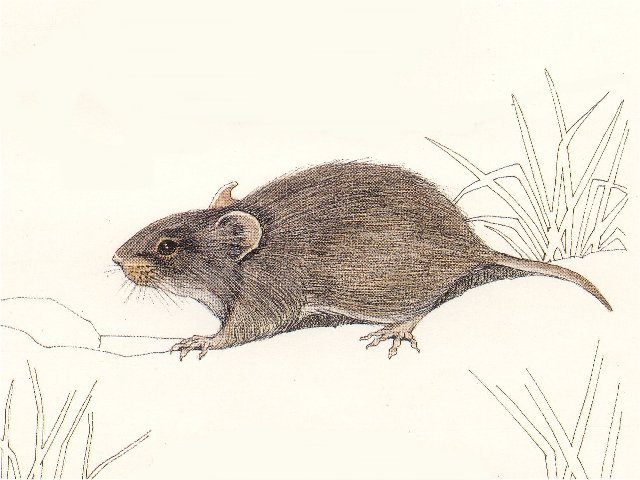 Rodents plays an important role in fynbos pollination as well as being important in the dispersal and survival of many fynbos plant species, especially those with nut-like fruit and no other obvious dispersal mechanism. Jan Vlok from the Cape Nature Conservation in his article on “Fynbos and Rodents” (Veld &Flora, December 1995) calls them “freedom fighters” in the fynbos system.

Many rodents eat flowers or flower-parts. In most cases, flower-feeding by African mammals is destructive and is of little or no benefit to the plant. Although pollination by non flying mammals is not a uniquely African phenomenon, the degree to which it occurs in the fynbos is exceptional and matched only in Australia, where the plants involved are usually from the Proteaceae or Myrtaceae. (Ref)

There are over 20 rodent species in the fynbos area. The flowers of rodent-pollinated proteas like Protea cordata, P. decurrens and P. humiflora and Massonia depressa shows many convergent traits which include: dull-coloured flowers positioned close to the ground with a yeasty odour that becomes stronger at night and copious amounts of easily accessible nectar secreted in the evening when rodents are active; and winter flowering. Other South African monocotyledons, such as Androcymbium pulchrum, Androcymbium eucomoides (Colchicaceae), and Eucomis humilus (Hyacinthaceae), have similar traits that fit the rodent pollination syndrome, suggesting that the rodents may have shaped the evolution of these floral traits. (Ref) 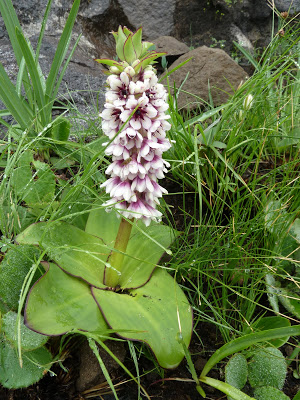 The South African rodents involved in the pollination of Protea species are seasonal nectarivores, feeding on foliage and seeds for most of the year. The main food rewards, nectar and pollen, are available to them in winter, when energy requirements of small rodents are high. More predaceous flower-feeders which eat entire flowers will also extract energy and various nutrients from petals, bracts and other flower parts, and rodent pollinators sometimes consume the bracts of Protea inflorescences. The nectar of Protea is unusual in that it contains the pentose sugar xylose. Within the Proteaceae, this sugar is restricted to the closely related genera Protea and Faurea, and it is not known from any other floral nectars. The concentration of xylose tends to be higher in mammal-pollinated species. Rodents prefers sucrose to hexoses and hexoses to xylose but, unlike birds, they were willing to drink pure xylose solutions and are able to digest it. Despite having a low sugar concentration (20%), the nectar of M. depressa is almost 400 times as viscous as an equivalent sugar solution. The jelly-like constituent in the nectar may discourage robbing by insects, while also facilitating lapping by rodents. (Ref)

Rodents can also extract protein pollen. By flowering in the middle of winter, when food resources are scarce, flowers of Massonia depressa, and Protea counterparts, become a valuable source of energy and protein for rodents.(Ref) 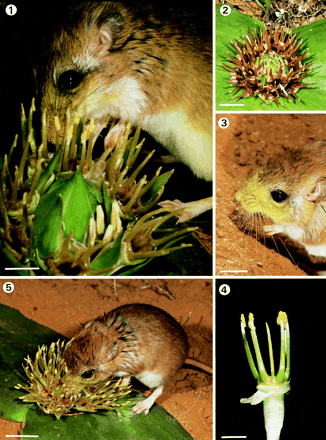 Rat’s noses are unbelievably sensitive. Their sense of smell is their primary sense, in much the same way as vision is ours. For as many nuances of colour, texture and light as we can see, they can smell. They can smell in stereo with each nostril working independently of the other. Over 1% of their DNA is devoted to detecting odours; an incredibly high percentage. That means that in rats, one in out of every 100 genes is involved in the detection of odours. (Ref)

Rats are able to discriminate odours in as little as 140 milliseconds. To a rat every object, every surface, every breath of air contains different smells and information. A rat’s sense of smell registers not only average scents, but also the presence of chemicals that denote a change in atmosphere or emotion. Rats also have a second smell organ, called the vomeronasal organ, mainly involved with smelling pheromones. From a tiny drop of urine from another rat, a rat is able to establish the rat’s sex, sexual maturity, reproductive status, sexual availability, social status, individual identity, and another rat’s inner state such as current stress level. (Ref) 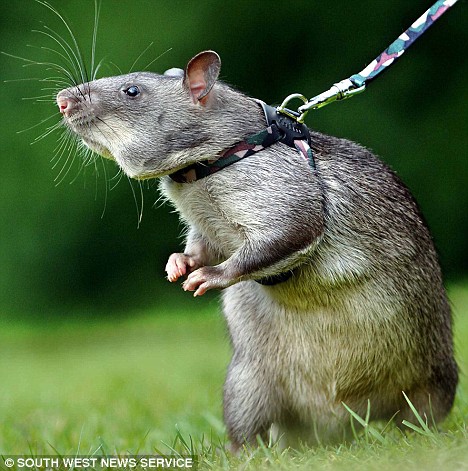 Due to their wonderful sense of smell and intelligence giant African pouched rats (Cricetomys gambianus) are being trained by APOPO as landmine sniffers and to detect TB in humans. The adults reach body lengths of 25-45 cm and they weigh 1-2 kg. As they are much lighter than dogs, they are much less likely to detonate the mines with their weight. APOPO’s rats are born and trained in Morogoro, Tanzania. Training starts when the rats are weaned at five weeks and pups are handled regularly to socialize them. They are trained to sniff the ground and to pause when they smell TNT, which is the main explosive charge in most mines. The training takes about 250 days; three times less than the time required to train mine detection dogs. When fully trained, the rats sniff out a mine, then sit and scratch at the spot until they are rewarded with food. An explosives expert then destroys the mine. 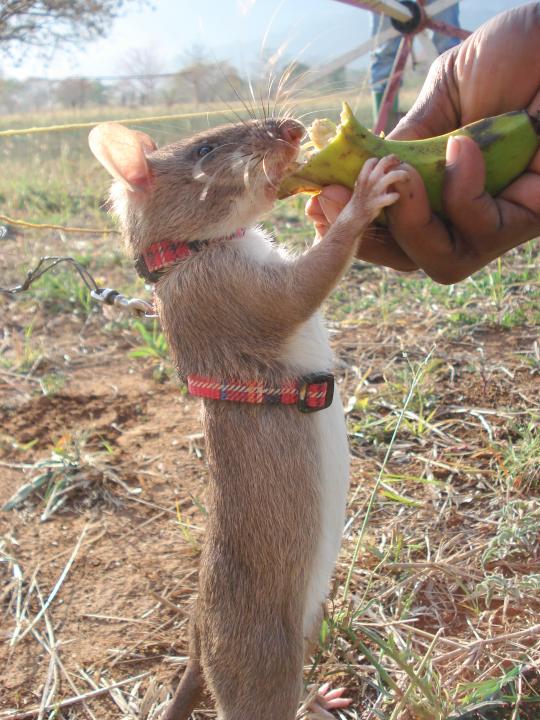 Getting a Reward for a job well done

A rat can clear 100 metres square in 30 minutes, equivalent to two days of human work In 2009 APOPO’s demining team cleared nearly 310,000 square meters of land, finding 182 landmines and 248 explosive remnants of war, and allowing more than 1,000 families to return to their homes. (Ref)

These Hero Rats could also be invaluable for detecting explosives, illegal drugs, and other contraband in cargo, in shipping containers, and in other contexts.

Tuberculosis is currently is present in two billion people. These rats can accurately identify the bacillus that causes tuberculosis by sniffing sputum samples and they are currently being used for second-line TB screening in Tanzania, where they increase case detection by more than 30%. In 2007, they identified more than 1500 TB infections that had initially been missed by the doctor’s microscopes. Utilising trained sniffer rats for TB detection is a potentially faster screening method and is at least as sensitive as smear microscopy. This method could be suitable for active case finding, especially where large numbers of samples are to be analysed in resource-limited settings, to complement existing diagnostic techniques. (Ref)

Bart Weetjens, the founder of APOPO, has this to say about rats:

“Rats absolutely have an image problem. People don’t like them and that is one of our biggest struggles. We are trying to change that perception. Rats are very sociable, very intelligent, highly like-able creatures.”

I can only agree with all my heart.

You can also adopt one these Hero Rats to help save lives. Click on the Logo and it will take you to the site.