There are some plants that make an indelible impression on you. Kukumakrankas are one of them, and not only because of its unique folk name, which comes from the Koina language, an extinct Khoi tongue. In the Cape Kukumakrankas have an almost fabled reputation, partly because its rarerity, its mysterious growing faces and of course the highly perfumed flowers and fruits. 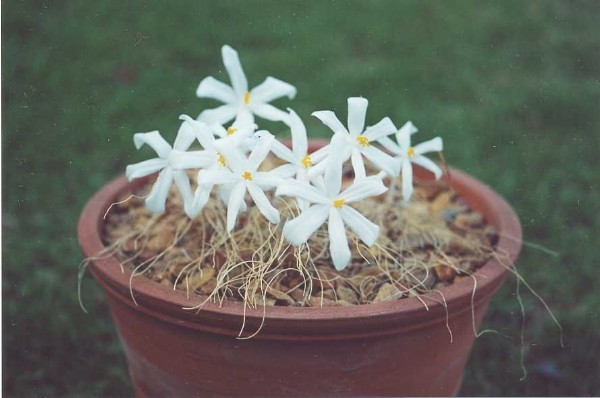 My father introduced me to Kukumakrankas. He grew up with Kukumakranka Brandy as a cure-all and a great aperitiff. One year he managed to get some bulbs, and we all watched with great fascination how this amazing plant emerged through its phases. We all waited with great anticipation for the legendary scented fruits to appear. 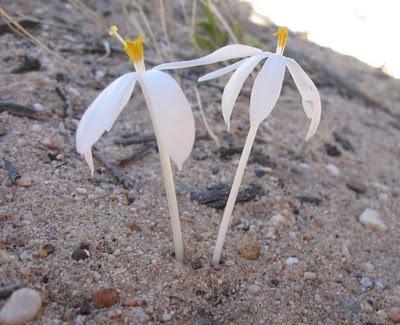 Once upon a time in the Western Cape countryside there was an autumn custom to hunt for the highly perfumed fruit, much like truffle hunts. It was a hunt in which according to legend, everyone participated in; farmers, the ministers, teachers, shopkeepers, women and children, some of whom had already scouted out the land in summer when the beautifully scented, star-shapped flowers appeared and had ringed with pebble or even sticks the places where fruit will be found later. In those days, about a century ago, it was possible to to gather a hundred or so in one afternoon. (Ref)

Long before that, the San and the Khoi-Khoi sang the praises of the vitues of the Kukumakranka or bramakanka, as they were known to the people of Namaqualand. There are as yet unconfirmed rumours that the San used them in their perfumes too. 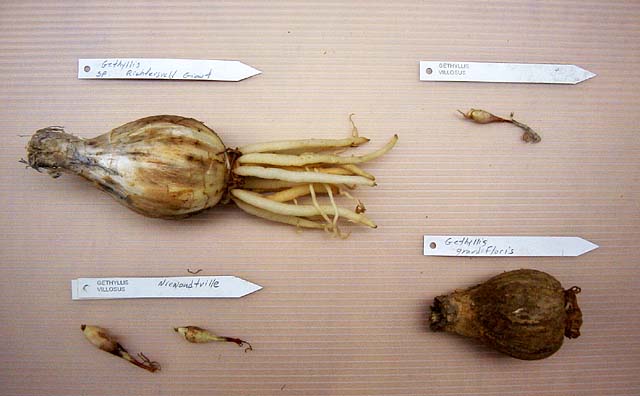 Linnaeus gave the Kukumakranka its botanical description; Gethylis. Gethylis in Greek means little onion or leek which resembles the bulb of the kukumakranka. The genus Gethylis is one of the most extraordinary of the southern African Amaryllids. Members of the of the genus are widely distributed throughout the temperate south-western and Southern Cape province and semi-desert regions of Namaqualand and southern Namibia. There are about 38 Gethyllis species and subspecies currently accepted, with G. afra and G. spiralis being the most abundant.

I have been trying for years to get hold of Kukumakrankas to at least be able to smell them again but most of all I have wanted to get hold of some of the fruits for tincturing. Not even the Botanical societies could offer me any. Seeds are rarely available. Kukumakrankas have become critically endangered through over-grazing and circle- irrigation as too much watering causes the bulbs to rot. I finally managed to get hold of a grower Lita Cole,  Kamieskroon-born self-taught Namaqualand botanist, who accompanied many a botanist in the veld, and also does guided tours of the area’s botanical treasures. I was hoping to get some of the fruits from her but as she informed me the fruits start sprouting almost immediately. So, the best way would be either to grow them yourself or to get to her during April (Autumn/Early Winter) and tincture them straight away, or to obtain some dried ones.

Members of the genus have an unusual annual development cycle which has three distinct phases. I am grateful to Liezel van Zyl who sent me a beautiful description of the phases. She found a large number of kukumakrankas on their property, where no animals or any agricultural activity had been for forty years, and marked the position of the plants with white stones to easily observe them.

The flowers vary from white, to deep pink, according to species. Some flowers have creamy white petals, rose tinted underneath.(There is even one species with wine-red flowers in the sandveld of Van Rhynsdorp.)

In the previous century, when they were still abundant, children used to call the flowers ‘Christmas Stars” because the almost stalkless flowers, appear out of the sand, and almost always flower on Christmas Day and lasts only one day. 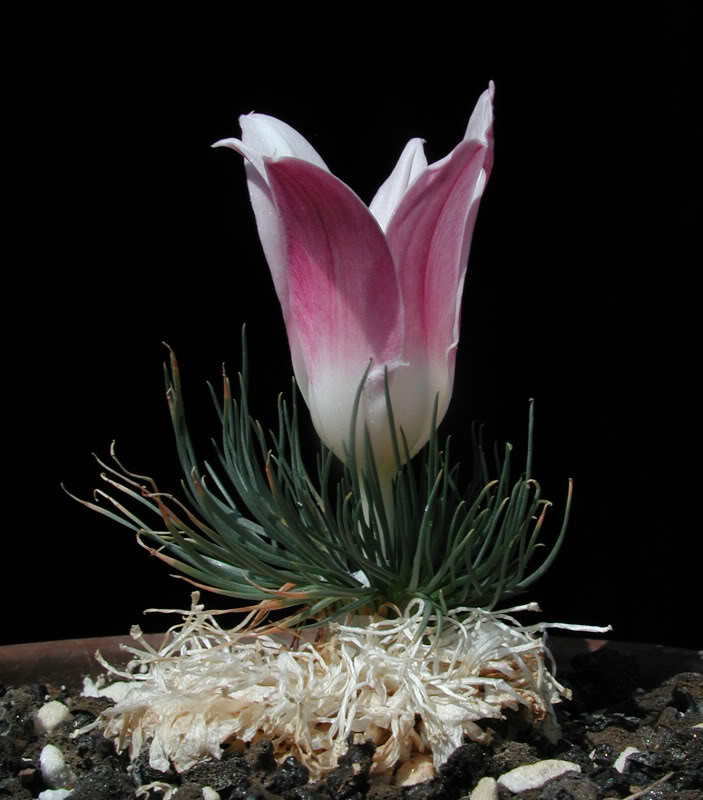 The shape of the flowers resemble in some cases, a large Frangipani flower, to a Tulip shape. The Grandiflorus have a large bloom, resembling a Magnolia flower. The scent is very heady ,exotic and lingering, without being overbearing, or nauseating. It is an enchanting fragrance, carried by the wind over long distances.

After pollination the flowers disappear deep under ground and the fruit begins to form and develops underground.  When fully matured, from 3 to 4 months, the fruit waits for the softening rain of late autumn and early winter (April – June) to coax it upwards. (Ref)

Then the short penduncle stretches until the whole of the fruit is forced through the moist ground. Its bright colour and strong scent make it very conspicuous and attractive and birds, sheep, porcupines, tortoises and other animals eat the juicy pulp and acts as agents for distributing the seeds.( Dr Louisa Bolus) 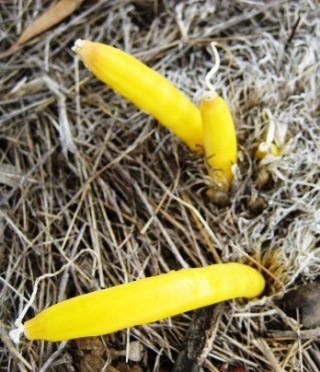 The size, shape and colouring differ significantly between species. In the smaller species they are thin, cylindrical, with a match length and thickness, the larger members – club-shaped, can reach 14 cm in length. Most often the fruits of yellow, red or orange, and even spotted. In some species the fruit can be colourless and odourless. In most species though, the fruit are very fragrant (smell of ripe strawberries), and tastes like custard-apples, or a cross between banana and pineapple. According to Liezel, biting into the fruits gives an explosion of exotic floraly-fruity fragrance, which fills the nasal cavity. The nearest similar taste is that of strawberries, but it is more potent, and more floral exotic.

As the fruit ripens, they become softer and quickly break down, allowing seeds to germinate near the parent plant. Each fruit contains a few dozen seeds. In G . longistyla the seeds number between 30 and 40. The seeds do not have a period of rest and are ready to germinate immediately after extraction, regardless of environmental conditions. The viability of the seeds is however, quickly lost. The seeds should be sown no longer than two days after collection.  (Ref)

Sometimes phase of fruits and leaves may overlap.

From June, to August the foliage appears, growing from the deep sandy soil. The leaves of the matured plant resembles a spray or fountain (think of those kitch fluorescent lava lamps) The whole bunch of leaves grow out of a white, with maroon speckled  tubular sheath The leaves are as thick as chive leaves, but harder, and deep green, to grey-green. Spiralling, from their tips to the base,at the speckled sheath, they resemble tendrils of wet spiralled hair. When the night breeze bears moisture from the ocean, the spirally leaves capture the dew, which runs down to the bulb. 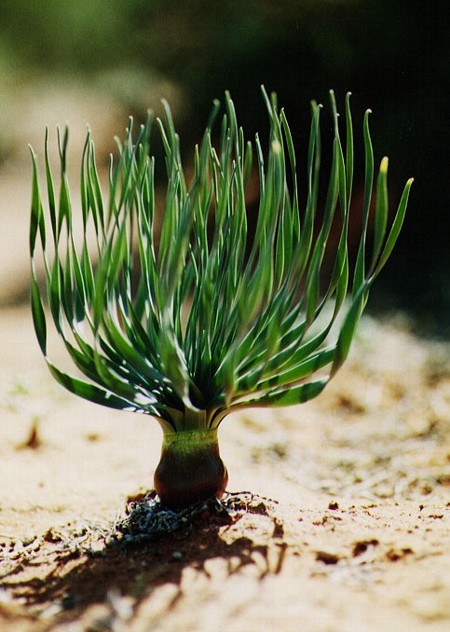 The leaves of some species such as G. ciliaris, G. spiralis, and G. villosa are spirally twisted, while others are densely covered with hairs and twisted like a clock spring. 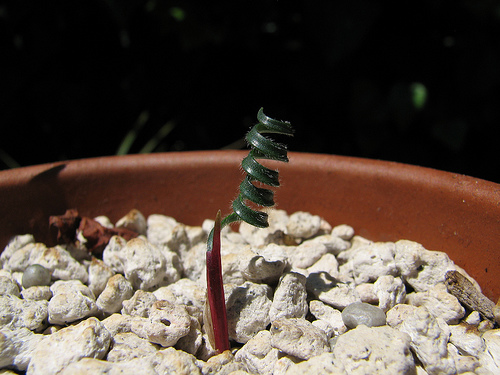 The bulb of a mature plant looks like a large white onion, with thick white roots. The older a plant gets, the deeper underneath the soil surface, it can be found. The bulb pulls itself deeper by the roots, every year, to retain temperature and moisture.  Some bulbs are found, up to a metre under the surface. It moves down approximately one centimetre per year.

Local residents also used the ripe, delicious smelling fruit for flavoring Brandy. The tincture or fruit brandy were used as a medicine for stomach cramps and colic. The local name of the plants – kukumakranka – literally translates as “help from a stomach illness.” In the The Cape Agricultural Journal a recipe for Kukumakranka brandy was published in the last century;

Put a little of the highly scented fruit in a little good brandy. The perfume will be will be transferred to the spirit within a few days and a beautiful nip will be at your command … This Cape liqueur rivaled imported yellow chartreuseThe smell of kukumakranka resembled in some measure that of strawberries and filled the whole room. It was held in great esteem by the ladies. – Thunberg

The traditional alcoholic infusion or tincture made from ripe fruit has been shown to contain some oils and esters of low molecular weight alcohols. Although the majority of compounds found in the Amaryllidaceae family are alkaloids one research has shown that none of the extracts from the Gethyllis species used, tested positive for alkaloids. Flowers and fruit showed higher antioxidant activity compared to other plant parts. The antioxidant activity G. multifolia flowers and fruit were found to be significantly higher than those of the other plant parts. The preliminary studies done indicate that further studies with Gethyllis may lead to the isolation of compounds with a potential to be used as drugs in themselves or as templates for novel drug development. The extracts having anticandidal activity could result in the discovery of novel anticandidal agents, while the plants demonstrating a broad spectrum of activity, may serve as leads to discover new chemical classes of antibiotics, that could serve as selective agents for the maintenance of animal or human health and also provide biochemical tools for the study of infectious diseases.  (Ref)

The dried fruits were once used in the same way as lavender sachets to perfume linen cupboards, handkerchief drawers and even entire drawing rooms.I also remember them as being used as Bible bookmarks.

I asked Lita Cole and Liezel van Zyl to describe the scent of the fruits to me; ‘Like a tropical fruit cocktail (Lita) and like strawberries (Liezel). It appears that most of the fruits have complex, fruity scents with scents varying among the species. G.afra smells more like ripe strawberries and the spotted fruit of G.britteniana custard apples. The head-space analyses of the volatiles of Gethyllis afra and G. ciliaris fruits gives a great insight of  the complexity of their scent (Ref): 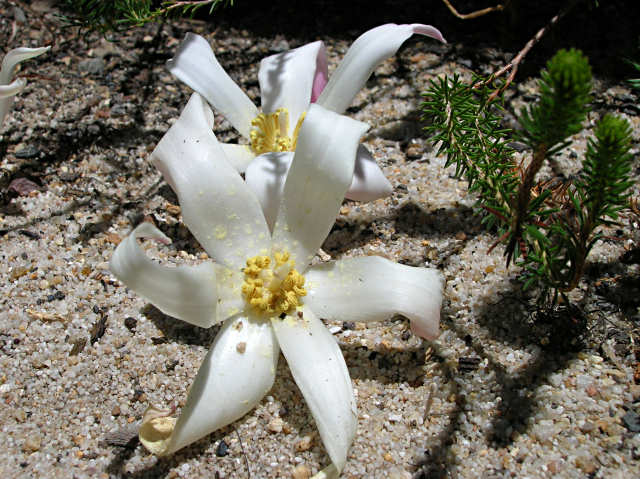 Twenty-nine compounds were characterized in the fruit of  G. ciliaris representing 96.5% of the total composition The major compounds identified that may be the contributors to the fruity-sweet odour of G. ciliaris. include: 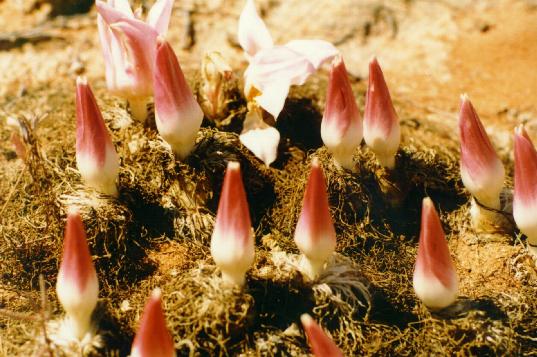 It is still possible to find Gethyllis growing on the mountains surrounding Cape Town and indeed the Helderberg area and legend has it that to find one will bring bring good fortune. So, guess what I will be doing around Christmas days; scouring the mountain walk for Kukumakrankas! My New Years wish is to at last smell Kukumakrankas again and a perfume based on their scent. I am currently busy with a range of perfumes based on the scents of indigenous plants and flowers. 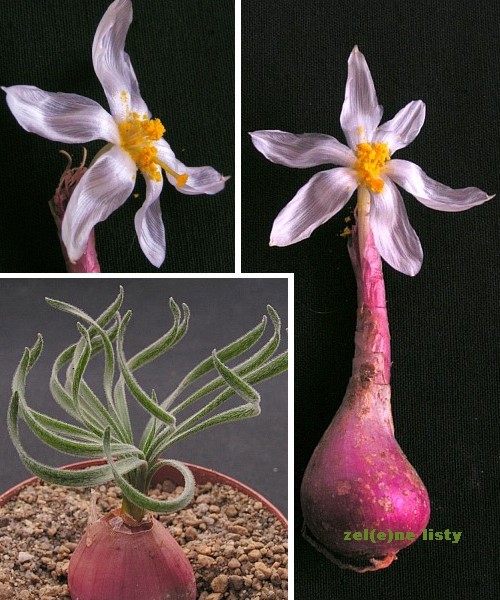