I have been asked to write an article and provide some recipes using vegetable greens. The old expression “Waste not, want not” is especially relevant when it comes to the leaves of many well known vegetables. In most traditional cultures around the world vegetable greens were commonly used in cooking and served as an important nutritional addition to the basic diet. Sadly, with the advent of Supermarkets and dense city living most people simply discard the leaves attached to a bunch of radish, and beetroot for example, and then buy their vegetable greens such as spinach and lettuce separately, not knowing that they actually chucked out the exact equivalent of their bunch of spinach.

As we are living in tough economic times with ever shrinking budgets, it is perhaps time that we rediscover the use of the often discarded so-called pot-herbs and make them part of the fashionable cuisine.

Although the use of vegetable greens in cooking may come as a surprise to most people today, many of the root vegetables we know today were originally not eaten but rather their leaves. In ancient times, people for example, exclusively ate the beet greens and not the roots. Carrots were originally also grown for their aromatic leaves and seeds, not their roots, and some relatives of the carrot are still grown for these, such as parsley, fennel, dill and cumin. Carrot seed essential oil is of course today still well known in aromatherapy and for its aromatic use in perfumery.

Leaf vegetables are typically low in calories, low in fat, high in protein per calorie, high in dietary fiber, high in iron and calcium, and very high in phytochemicals such as vitamin C, carotenoids, lutein and folic acid as well as Vitamin K.

So let’s look at some commonly discarded vegetable greens’ uses and nutritional value. 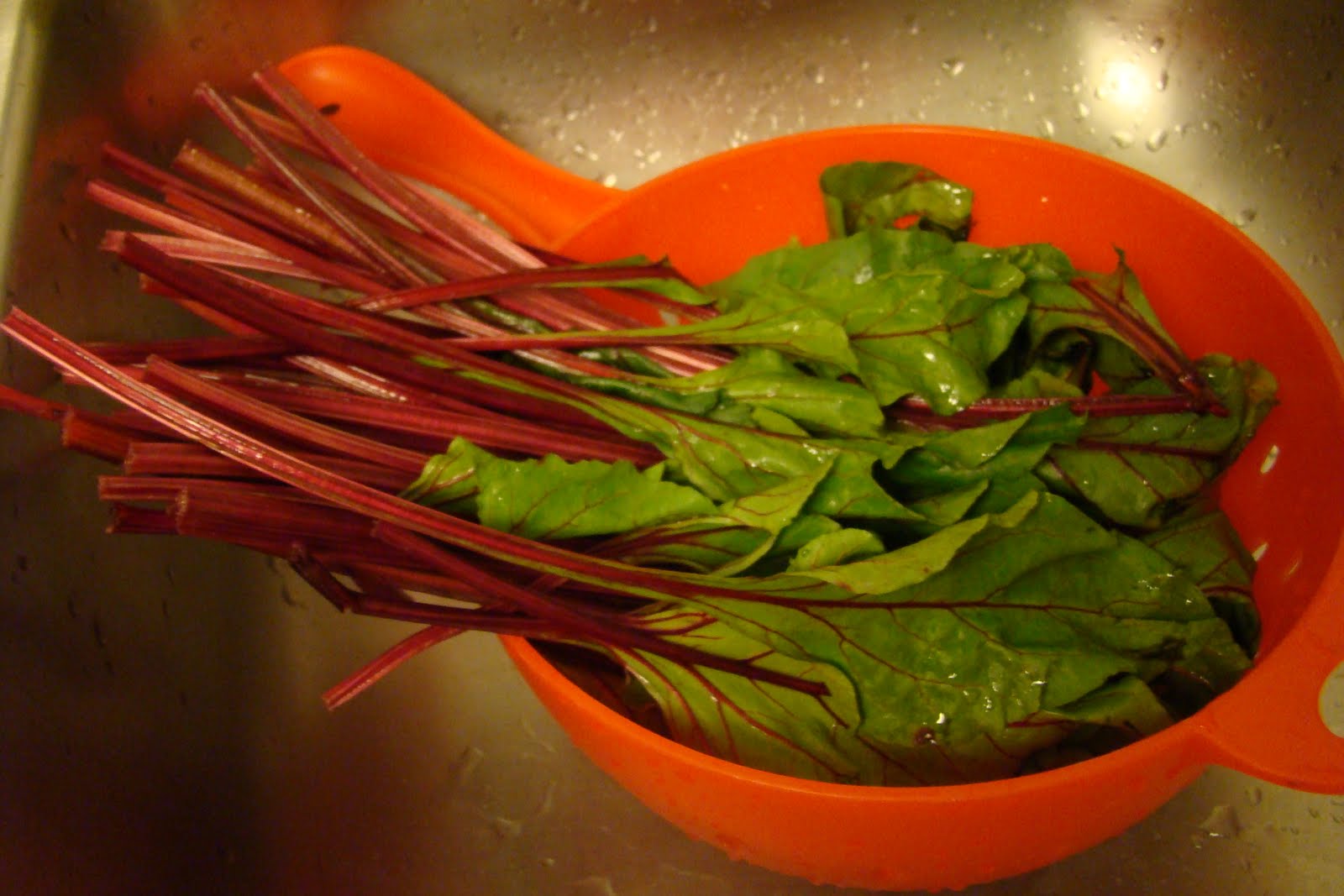 The ancestor of the beetroot is thought to have originated in prehistoric times in North Africa and grew wild along Asian and European seashores. Beetroot greens still form an important part of most African countries cuisine. The beetroot leaves are incredibly rich in nutrients, concentrated in vitamins and minerals as well as carotenoids such as beta-carotene and lutein/zeaxanthin. As well as being a good source antioxidant vitamin C and they are also a very good source of the antioxidant manganese, and the unique phytonutrients in beets provide antioxidant support in a different way than other antioxidant-rich vegetables. Beet antioxidants is said to have special benefits for eye health and overall nerve tissue health. The powerful nutrient compounds found in beetroot is also said to help protect against heart disease, birth defects and certain cancers, especially colon cancer. (Ref)

Apart from the health benefits of beetroot leaves, they are also delicious to eat both raw and cooked. The taste resembles that of Swiss Chard and is often used instead of Chard or spinach in recipes. I often use the raw leaves in salads and on sandwiches instead of lettuce, or combined with other vegetable greens. In fact I love the taste so much, that I will often just eat the leaf and stalk as a snack on its own. The leaves and stalks are also great in stir fries, stews or combined with other vegetables.

I have adapted the following recipe from the cookbook from the well known African Café in Cape Town.

Wash the beetroot leaves very well; making sure all the sand and little bugs are washed away. Chop roughly and put into a pot with a lid. Steam the beetroot tops over a slow flame, until it has reduced in the pot. Add salt, spices and chillies and stir until mixed. Remove from stove and stir in the maize meal and the water. Return to stove; cover the pot and leave to steam over a low flame for 30 minutes. Stir the pot from time to time. When cooked, open the pot and leave to cool slightly. Add the chopped onions and form flat patty shapes and set aside. Heat oil in frying pan and fry imifino until crispy on both sides. Drain on paper towel and serve warm.

In a heavy skillet, heat oil and fry onion until golden brown. Add the ground shrimp and spices. Simmer for about 6 minutes over a low heat to warm your spices. Now add the chopped tomatoes and tomato paste. Turn up the heat and cook until a nice thick, gravish consistency. Add garlic just before turning off the heat when done.

Traditionally Umbido – Zulu beetroot stew – is served on phutu pap, which is a staple food in South Africa; however, you can serve the Imfino patties with the umbido instead of the gravy. The recipe for Umbido is from Dorah Sitole cookbook, “Cooking from Cape to Cairo.”

Heat the oil, add the onions and gently fry until transparent.
Add the beetroot leaves, tomatoes and seasoning. Simmer gently for 10 minutes until soft. Stir occasionally with a fork.
Carefully mix in the hard-boiled eggs.

Bring water to boil. Add maize meal all at once without stirring, reduce heat and simmer about 20 minutes until cooked through.
Stir with a large fork until crumbly.

Bean and other Legume Leaves 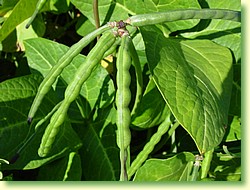 In the current climate of mass produced farming most vegetables are grown for a single purpose only. In an eye opening article, “Legume Species as Leaf Vegetables,” Robert P. Barrett shows just how much we have lost in our knowledge of what is edible and nutritious.

According to him small farmers in Africa, Asia and the Pacific usually make their grain legume crops serve several purposes. “Seeds may be cooked, or may be germinated to give sprouts. The crop in the field can be thinned and the surplus seedlings eaten, and stem tips and leaves can be plucked from scattered plants, without reducing the seed yield. Pods and seeds can be consumed over many days, but the leaves are available for eating even longer … Most domesticated legumes are valued primarily for seeds, yet the leaves of many grain legumes equal or exceed the protein content of their seeds on a dry weight basis. Because leaves are produced earlier and in much greater volume than seeds, the protein productivity is higher-about 15 times better for cowpea and 3.4 times better for winged bean.”

Bean leaves are consumed in at least eight African countries and Indonesia, while cowpea is consumed in 18 countries in Africa and seven more in Asia and the Pacific. Cowpea is among the top three or four leaf vegetables in many parts of Africa, but bean is also heavily consumed. Cowpea and bean are the most consumed legume leaves. Leaves or tender stem tips of the common pea (Pisum sativum L.) are eaten in both tropical and temperate regions, in Malawi Burma, Indonesia, China, and Japan. Peanut (Arachis hypogaea L.) is also eaten as a leaf vegetable, in Brazil, Paraguay, Argentina, Senegal, Mali, and Indonesia. Fennugreek (Trigonella foenum-graecum L.) is an important potherb in southern Asia where it is known in Hindi as mehti. Leaves are also eaten in Japan, the Mid East and Mediterranean, Kenya, Tanzania, and Malawi.

You can find African recipes and information for Cowpeas at this link.

The following Recipe for Kenyan Cowpea leaves (kunde) Luhya-style is from the “The Traditional Green Vegetable Cook Book” where you can find more unusual recipes for little known greens.

Preparation:
Wash cowpeas leaves in water and add to 1 litre of boiling Luhya Brine in a pot over medium heat, simmer for 30 minutes, stirring occasionally.  Set cooked leaves aside, the Luhya Brine is now green in colour.

Place cooking fat into a pan over medium heat, add onion, tomatoes, garlic and salt.  Fry the mixture for five minutes or until cooked, stirring often.

Add the cooked cowpea leaves and water to fried mixture and stir until it begins to simmer.  Add one small packet (one pint or 500 ml) whole milk, take to a boil and simmer for 15 minutes.  Kunde spinach is best eaten with ugali (Kenyan name for Phutu). Serves four to six.

Preparing traditional Luhya cooking brine (omusherekha).
Dry 10 to 15 pods of green beans after removing the immature seeds, burn the pods over a hot, dry pan, collect the burned pods and pass one litre of clean water through the pods using a sieve (olusherekho is a traditional Luhya earthen sieve).

The resultant brine water is called omusherekha.  Traditional Luhya cooking brine is not only a preservative, but has many other uses such as reducing animal fats or making traditional salt (omonyu omufume).
This recipe from Andanje B. Mafunga, Department of Culture, Nairobi. 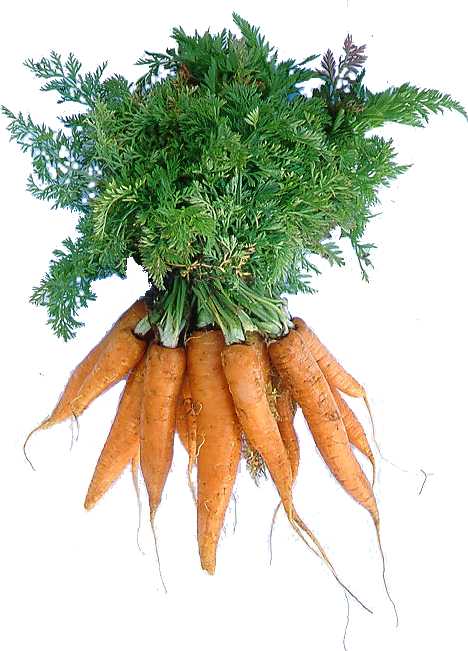 There is some dispute as to whether carrot leaves are actually mildly toxic, or not, however, on doing some research it appears that they are not toxic but rather allergenic- it will only affect susceptible people with allergies to the plant. The leaves do contain furocoumarins

I am not allergic to it and have used it in soups. The leaves are rich in protein, minerals and vitamins and high in vitamin K, which is lacking in the carrot itself. The tops of the carrots are loaded with potassium which can make them bitter. The tops are antiseptic and can be juiced and used as a mouthwash. You can find great recipes for carrot tops at the Carrot Museum.

The recipe for Malawian Msamba is from the African Kitchen by Josie Stow and Jan Baldwin. 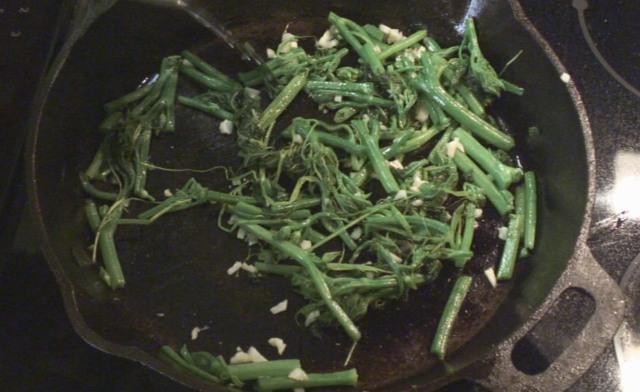 It can also be made with sweet potatoe leaves. 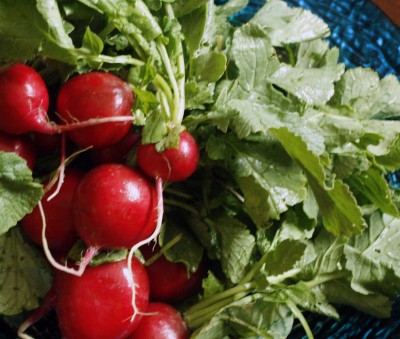 Radish greens have six times the amount of vitamin C found in the root, as well as a significant amount of calcium, iron, and thiamine. These vegetables are also good sources of folic acid, potassium, and the trace mineral molybdenum. Molybdenum is thought to be involved in nervous system development, kidney function, and energy production at the cellular level. You can find lots of Radish Green recipes on the web, click on the above picture for a recipe of radish green pesto at this link for stir fry. 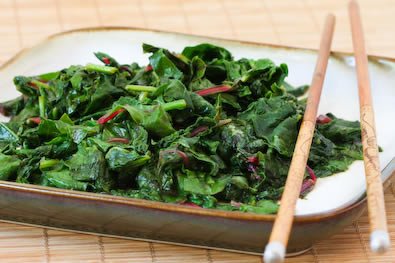 In Zambia Kalembula (Sweet Potato leaves) is a favourite among the Nsenga people. The Recipe is from Dorah Sitole, “Cooking from Cape to Cairo.”

Boil water, add tomatoes and cook until soft.
Add sweet potatoe leaves and cook for 10 minutes more.
Season with salt and pepper. Serve with Nshima (Recipe to follow) or Phutu.
Variation: Make a sauce using freshly ground peanuts and boiling water, add it to the leaves and simmer for 20 minutes. This dish is called Mbyori.

Heat the water to boiling point. Add salt. Gradually add the maize meal, stirring all the time until it is mixed with the water.
Cover and allow to cook over a medium heat until cooked through, stirring constantly to avoid burning. 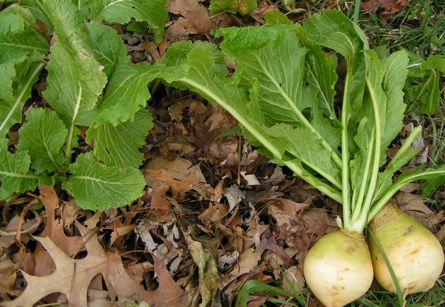 Turnip greens resemble mustard greens in flavor. The green leaves of the turnip top (“turnip greens”) are a good source of vitamin A, folate, vitamin C, vitamin K and calcium. Turnip greens are high in lutein. Wikipedia has great info on turnip greens.

These are just a few examples of leaves so often simple discarded that can be used in cooking. Most recipes calling for traditional greens can be replaced with these greens and more that I have not listed.

Lastly here is my versatile soup recipe that can be used with any greens that you may have available, except cabbage.

Wash the greens well, chop and set aside. In a large pan, cook the onion and mustard in the butter and oil until soft but not browned. Add the garlic and potatoes and stir for a few minutes, then add the greens and stir until they have wilted.
Add the stock, and lemon juice or “old sour”, bring to boil and simmer until the potatoes are cooked.
Liquidize the soup and return to the pot.
Season with salt and Cayenne pepper according to taste.
Warm up and serve each portion with a tablespoon of plain yoghurt and garnish with chopped chives.