Here in South Africa October brings those glorious spring days that is of narcotic beauty.  It lulls your mind and body to believe that you are in an eternal Eden; a place between, where time does not exist. The air is filled with sweet fragrances rising in the warmth of the sun. Butterflies and bees happily buzz between floral delights oozing with nectar, while birds and frogs chatter with spontaneous joy. In the distance the echo of rhythmic breaking waves is interspersed with the laughter of children in the happy abandon of the day.

Such glorious days always bring C. Leipoldt’s poem “Oktobermaand.” to mind. I often wondered why that particular poem so imprinted my young mind that it stuck with me through out my life. Looking at it now I realize that it is the poem’s associations with the scents of spring that captured my mind as a reflection of my passion for all things aromatic. Reading the poem again after so many years, it contains for me all the elements around which to design a spring bouquet perfume. Violets, orange blossom, gardenia, apricot, rose and jasmine are all mentioned in the poem. Although the poem will translate beautifully into a perfume, which I am busy with at present, it is probably one of the most challenging poems to translate from Afrikaans to English. As Leipoldt himself once said; there are words in every language that are not easy to define. I have however, attempted to translated a section of the poem just to give you a taste of October month in South Africa.

Violets in the foyer
Violets blue and red!
Violets everywhere in the field,
And everywhere, oh, so beautiful

This is the month of October
most beautiful, beautiful month:
Then the day is so bright,
so green, every night,
So blue and without clouds
heaven glorious above,
A garden full of colors
the ash grey old Karoo

Though the day was as iron
seared in fire
The ferns in the glens
heat bleached to yellow,
Yet as the sun descends
below the mountains,
Then through the whole world
the most beautiful fragrance penetrates

This is the month of October:
I think, people celebrate
For ever in heaven
October month as here!
Why do you wish for more than flowers,
a clear day and night?
What can you expect, better, more beautiful,
or more glorious?

I’m still in October:
My garden is still so green,
So white with all that is beautiful,
with blossoms of orange,
So beautiful in the morning.
so glorious at night!

Violets in the foyer
Violets blue and red!
Violets everywhere in the field,
And everywhere, oh, so beautiful 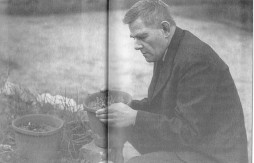 Outside of South Africa very few people know anything about C.L Louis Leiplodt (1880-1947),  here however, he is considered as one of the greatest Afrikaans poets. He was l’uomo universale, a true Renaissance personality. He was also a playwright, novelist, chef, botanist, journalist, and a medical doctor. A man after my own heart, he was however described as happiest, when he was out on the veldt botanizing. For Leipoldt, an appreciation of the past was an integral part of the present. It is also a philosophy I personally adhere to, which is perhaps why ancient aromatic techniques so interest me and why I was so delighted to discover “Leipoldt’s Food and Wine” book. 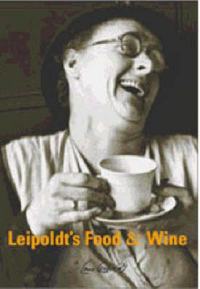 Born in 1880, of Rhenish missionary descent, Leipoldt’s first culinary education came about as a result of his austere mother’s insistence that her sons had to be home-schooled. Christie, as CL Leipoldt was known, received an eclectic education, and grew up speaking English, Dutch and German, and reading Latin and Greek.

Forced to spend time at home, he spent much time in the company of the family cook, Maria, who sparked Leipoldt’s culinary interest. She taught him the art of creating tasty, slow-cooked traditional food, and revealed the medicinal properties of herbs to him. Many of her instructions are recalled by Leipoldt in the book.

As, a medical student in London, Lepoldt often worked on Sunday evenings at hotels such as the Carlton, the Ritz and the Savoy, where he washed dishes to supplement his income. At the Carlton he met the master chef Auguste Escoffer, whom he described as “… inventor of new dishes, the most celebrated artist of all time in his chosen profession.” When Escoffer moved to the Savoy, Leipoldt made it his business to be employed there so that he could learn as much as possible from this master of the culinary art, under whose guidance he enrolled for and obtained a diploma in international cuisine.

In this trilogy is included Leipoldt’s Cape Cookery, Culinary Treasures, Three Hundred Years of Cape Wine. This book is a must for anyone interested in the culinary and wine history of the Cape, forgotten ingredients, old techniques, and rare historical recipes. His personal anecdotes in itself makes for a very interesting read.

What I really enjoyed about the book is the insights it gave me into a time when ingredients we so take for granted were not available. He gives for example one of the oldest Cape Malay recipes that cooks used before ready-made curry powder was available. It was essentially a braise of different spices, with herbs, vegetables, salt and sugar, in butter or fat, to which was added, as a thinning, tamarind water or vinegar and coconut milk. The first curry powder in South Africa was imported from China circa 1670 and from the beginning of the eighteenth century, it was used to make curry sauce.

Pound separately in your mortar (which you should wipe out after each pounding with a little coconut milk) green ginger, fennel seed, aniseed, allspice, coriander seed, cardamom seed, a peach kernel and three blanched almonds, green and red chillies, mace, nutmeg, black pepper, cloves and fresh lemon peel. Cut up finely an onion and few cloves of garlic, with some thyme, basil, celery, sage and rosemary; and braise them in a little sheep’s fat. When brown, add a few cumin seeds. Take all you have pounded and mix it with powdered tumeric, till it has a fine yellow colour; moisten with tamarind water and stir it into the braised onion and garlic; add more tamarind water to make a thick sauce. This you can use for making any curry, by frying your meat in it. If you think it burns the tongue too much, you may mellow it by adding sugar or by reducing the amount of chillies.

For me one of the most interesting sections is “Velkos or Food from the Veld”; defined as edible uncultivated wild foodstuffs that are made eatable according to the old Cape recipes which includes the famous Jakkalskos (jackal food) – Hydnora africana – which is a root parasite which produces a single underground fruit and is found in the dry and semi-arid parts of the Succulent Karoo, Little Karoo, Eastern Cape Karoo, and the dry coastal thickets between the Eastern Cape and KwaZulu-Natal. 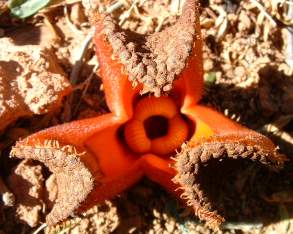 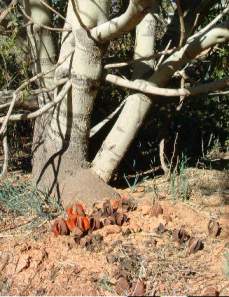 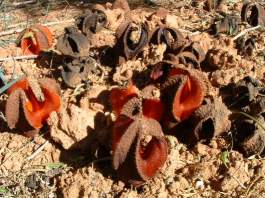 The unusual flower has an unpleasant smell but the fruit is a rare delicacy. Leipoldt remarks that when he was young it could be bought at the old fish and fruit market in Cape Town and that the chef at White House in Strand Street would sometimes serve it as a dessert. He gives the following description of the dessert by her; 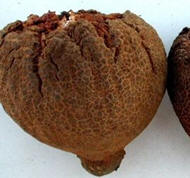 Cut open the fruit with a silver spoon or wooden spoon. (Whatever you do, please don’t use steel; somehow it makes a difference to the taste, and then you might as well eat tapioca pudding.) Scrape out the soft inside and press it through a sieve to remove the small, hard, bitter seeds, beat it up with a touch of cream, a glass of  jerepigo (nowadays I would use a good sherry) and a pinch of fine sugar. Sprinkle with cinnamon, and serve with a biscuit in a cream.

Jakkals kos is definitely another forgotten flavour of Africa on my list to track down. It can be cultivated so I wonder if there are any growers out there.