Africa is perhaps best known through the ages, for its Frankincense and Myrrh, though not many people are aware of how many varieties of Myrrh and Frankincense there are, and how different their scents are. True Frankincense has for an example a lemon/lime citrus scent and Olibanum (Boswellia.serrata), mainly from India, has an orange citrus scent and is generally darker in colour. In Africa Somalia is especially renowned for both Frankincense and Myrrh, however, outside of Somalia there are many other varieties of both Frankincense and Myrrh in Africa. The Myrrh most people know is for example is Commiphora myrrha. There are however, 37 other species of Commiphora which are presently known from the Flora of Southern Africa region alone; twenty-nine of which occur in Namibia. Most Commiphoras exudes resins and thus has a potential for aromatic extracts.

It was indeed from Namibia that I at last found which was for me the pivotal ingredient for designing an all African perfume. I heard about a project that the IRDNC (Integrated Rural Development and Nature Conservation) has in the Kunene Region to developing Commiphora resources for income generation among the Himba.

Omumbiri (Commiphora wildii) has been used traditionally by the Himba to make their own perfume. They make both a dry powdered perfume and a mixture with the Omumbiri,ochre, and butterfat. The omumbiri resin is used by placing it at the bottom of a container made from a cow horn. Animal fat and ochre is then placed in the container. The fragrance of the resin permeates the ochre and animal fat mixture so that when it is rubbed on the skin, it has a pleasant smell. Himba women rub their skins with this mixture on a daily basis. They live in the Kunene region of this vast desert land and because of their seclusion from outside influences, have managed to maintain much of their traditional lifestyle. The Omumbiri project has helped them to maintain their nomadic life style and culture. 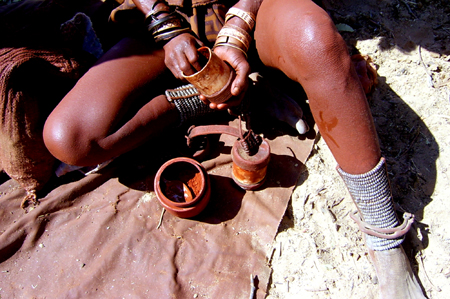 The Omumbiri is used only for perfume making among the Himba. They make both a dry powdered perfume and the ochre, butterfat mix perfume. The dry perfume mix is made up of more than 20 plants – some of which are not found in the area. Karin Knott has been trying to identify these plants – but a few are found only on the holy mountain and as she says. “I haven’t been given the privilege of going there yet.” Karen Knott works in the Kunene Region for the IRDNC, a field-based, non-governmental, Namibian organisation that gives technical and financial support to the communal conservancies 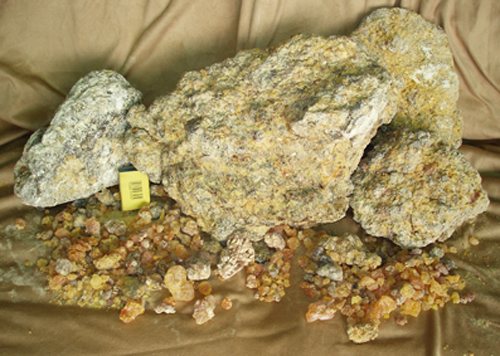 Omumbiri (Commiphora wildii) as a resin is new to the market place and therefore does not have a history of grading like C. myrrhra. The Himba collects the Omumbiri resin from the trees and then take it to a central collection point in the conservancies in the Namib. The gum is then weighed and the collectors paid on the spot. The gum is placed in drums with about a 150kg capacity. As soon as the drum is full it is then collected and taken to the central distribution storage. From there it is exported unsorted and ungraded. 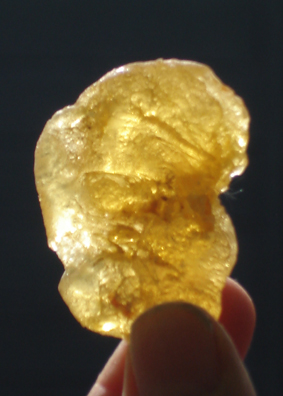 Unsorted and ungraded it sells for twice the amount per kg than Myrrh. No tapping is used in any of the conservancies in Namibia to ensure sustainability.

Since most of the market has been for the distillation of essential oil, by the large companies, grading has not mattered to the current customers. Artisan Natural Perfumers and creators of hand blended premium incenses have different criteria and requirements to those of the mass market, therefore do require a grading of the resins. 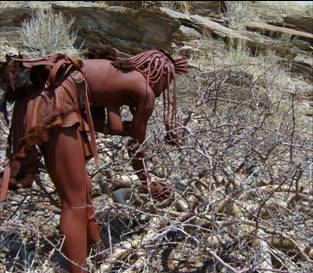 I have now received the second batch of Omumbiri and have a good idea of what can be expected of each shipment. Most of the shipment consists out of large clumps as is shown my pictures. This is due to way it is collected; the harvesters go out for several weeks and the temperatures are over 40 degrees, so the lumps form in their bags as they walk.

The gum varies in colour from light yellow, orange/amber, to dark red. The lighter colour has a fresher scent and the darker colour richer and deeper. The light colour is more brittle and tends to crumble when dry, whereas the darker colour is far denser and do not crumble easily. The Himba themselves make no distinction between the various colours for their perfume purposes. I have sent samples of what I discerned of the various grades to some members of the Natural Perfumers Guild for evaluation. As there is no history of grading for the Omumbiri, we are still in virgin territory.

The clear resin is usually the freshly exudated resin but colours will vary between areas and individual trees. As it is exposed to more heat (whilst still on the plant) it generally becomes crystelized or dusty. The Himba ladies say that you and store and then use the Omumbiri for up to 5 years.

Traditionally, Myrrh resins are sorted and graded according to size, colour and state of cleanliness before being bagged for export. In Somalia there are up to seven grades of maidi (olibanum from Boswellia frereana) and three grades of beyo (olibanum from B. sacra). The larger, paler lumps used for chewing are more highly valued than the smaller, darker coloured pieces and the powder and siftings. 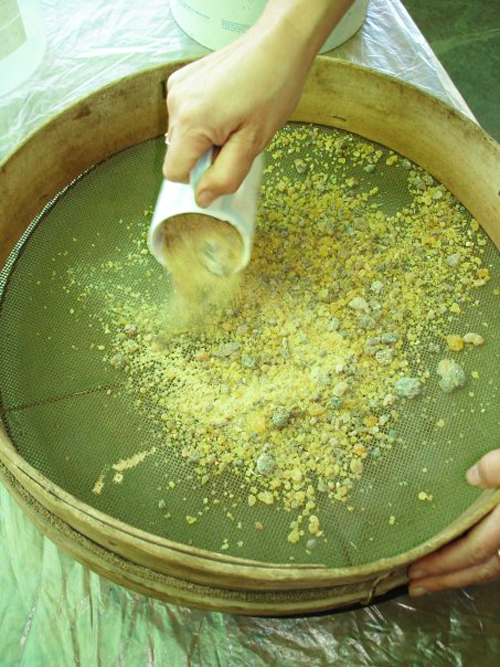 Myrrh is usually only classified as cleaned or uncleaned.
An example of grading of Somalian Myrrh is as follows;

Grade 2
Cleaned myrrh gum pieces with a mesh size of between 4mm and 6mm.

Grade 3
Cleaned myrrh gum pieces with a mesh size of between 2mm and 4mm.

Myrrh that is slightly sticky on breaking, is considered best for the production of essential oil (not only for myrrh but also olibanum and opopanax oils) as it indicates a high oil content. Quality of the oils is judged on aroma as perceived by the prospective buyer.

Through my personal experiments, I have come to really love Omumbiri. Burning the resin immediately relaxes me, and reminds me of ancient sacred places. I have been working for a long time on a perfume that for me captures the soul of Africa, using only African ingredients. My Omumbiri tincture along with Hyraceum finally completed my perfume.

Read about “now smell this” comments about the Omumbiri project

Scented Smoke Enfleurage
African Aromatics
Oh, Sugarbush, how sweet you are to me.
Omumbiri – Updates