It appears that it is not only humans who compose signature scents to attract mates. The male neotropical orchid bees (Euglossini), spend their entire lives collecting volatile fragrances from the rain forests in South or Central America.using a process very similar to enfleurage. 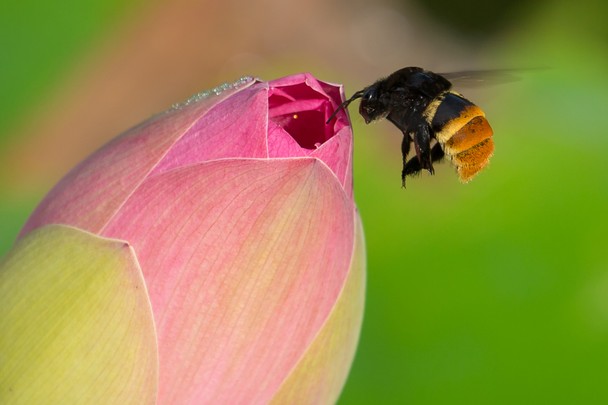 They have uniquely modified legs which are used to collect and store different volatile compounds (often esters) from flowers, primarily from orchids, as well as Solanaceae, Bignoniaceae, and Euphorbiaceae, as well as nonfloral sources such as decaying wood, rotting fruits, feces, and tree wounds (resins). (Sounds like normal sources for perfume ingredients?) The bees store the fragrance in pockets in their hind tibia, probably adapted from the pollen baskets (corbiculae) of ancestral bees.  In the process they relocate carrier lipids from their leg pockets, shuttle them back to the labial glands and reuse them on subsequent bouts of fragrance collection. It enables males to use large amounts of carrier lipids to capture efficiently tiny quantities of volatiles, and to do so repeatedly from varied sources. These lipids, mostly straight-chain hydrocarbons, alcohols, esters, acetates and diacetates, are spat onto the fragrant surface and probably serve to dissolve and retain the volatiles. 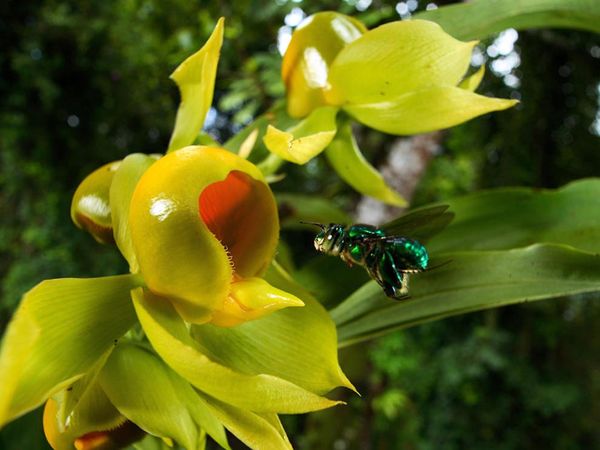 An orchid bee with an arrow pointing to where it stores the fragrances, photo from Ramirez 2009, Current Biology

By re-using the carrier secretion, an ever-increasing concentration of volatiles builds up in the leg pockets and through this lipid cycling complex perfume bouquets are created, forming what one can call a specific signature scent. It is speculated that their individual fragrance bouquets serves as an indicator of male genotypic and phenotypic quality, possibly reflecting foraging skills and/or survival abilities to female bees.

It appears that the accumulated bouquet of males contain information on the individuals’ foraging history and survival. This intrinsic information on male performance may be the basic prerequisite for sexual selection to act on and shape male fragrance collecting behavior. If females have inherited preferences for certain high-quality fragrance phenotypes, then fragrance collection could have evolved through female choice and sexual selection Female preference for males that closely match a specific optimum fragrance phenotype may reduce the risk of wasteful and potentially fatal hybrid matings.

Looking at the table of the fragrance compounds found in the hind tibiae of three of the soecies of Orchid bees one could be forgiven to mistake it for a complex perfume formula. Among the compounds are; hexahydrofarnesyl acetone, cineole, methyl salicylate, a-pinene, nerolidol, sabinene, germacren D, and B-pinene and a few even contained vannilin. Nothing new under the sun!