Once upon a spring time, a long time ago, I saw the striking sight of the tall blue spikes of Aristea capitata (a member of the Iris family) and the pink purple blooms of Pelargonium cucullatum set the verdant mountain slopes ablaze in colour. Ever since then green,purple and blue became my favourite colour combination. They are now bringing me happiness in my garden. Pelargonium cucullatum (Tree pelargonium) is the parent of many modern pelargonium hybrids, and grows on the sandy and granite slopes along the Cape coast from Saldanha to Baardskeerdersbos. 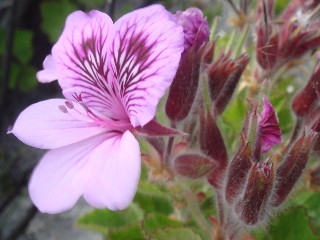 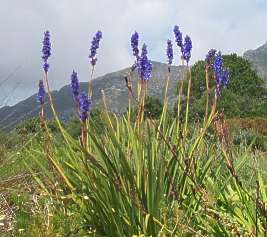 Traditionally this pelargonium was used medicinally to cure colic, kidney ailments, diarrhoea, coughs and fevers. The leaves were used as a poultice for bruises, stings and abscesses. In the nineteenth century it was used as a hedge-row ornamental in Cape Town. It is also useful as a cut flower as the branches last for many weeks in water.(Ref)