I have always loved the mesembryanthemaceae family which forms a major and unique component of southern Africa’s arid land flora. In spring, after the rains, they bring a riot of almost neon-like colour to what previously appeared to be a barren landscape. I particularly loved the Bokbaai vygies (Dorotheanthus bellidiformis) as a child. They vary in colour from white to pink and shades of orange and yellow. I vividly remember street vendors selling little parcels of wet newspaper buddles of Bokbaai vygies. Sadly, you do not see the sellers anymore. 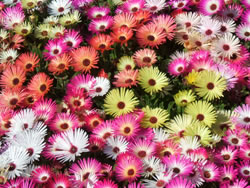 Mesembs are extremely diverse. Mesembs comprise 127 genera and about 1 700 species, and account for 63% of southern Africa’s succulent flora, and almost 10% of South Africa’s Flora. The family is almost entirely endemic to southern Africa with only about 20 species occurring naturally elsewhere in the world. They range from annual to perennial; from minute to compact and tufted to prostrate to decumbent; herbs, dwarf shrubs, sub shrubs or shrubs, but are rarely spiny. They are the subjects of a huge trade in ‘curiosity plants’ among succulent collectors. Mesembs display features not seen elsewhere in the plant kingdom. The combination of minutism, mimicry and extreme succulence accounts for much of the variation in form and bizarre shapes that add to their appeal. Virtually all the Mitrophyllinae will cross both within each genus and between genera, which might help to explain the numerous bizarre “species” in this group (Ref) 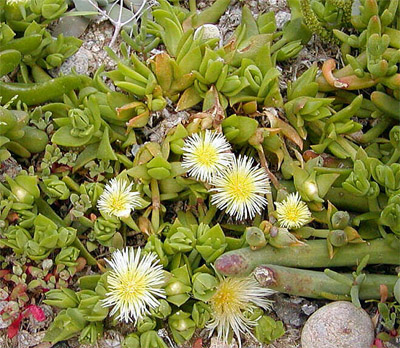 Carpobrotus edulis, known as the sour fig, my favaroute snack since my childhood, is eaten as dried fruit or jam here in the Western Cape. In addition, the astringent juice of Carpobrotus leaves is used medicinally for sore throats, bluebottle stings and fungal infections (Ref) 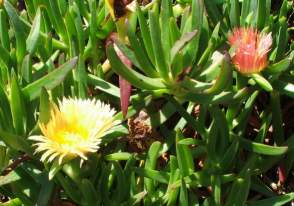 Delightful and curious as the mesembs are from physical appearance only, scent was the last thing I associated with them, until I came across an article in “Veld & Flora”, September 1991. “Scents and Sensibility – scent among the mesembs,” written by Steve Hammer, who is not only an expert on mesembryanthemaceae but also a very witty writer on the subject.  As he so dryly comments about tips for growing mesembs;

“And yet advice is a funny thing: people ask for it freely but they rarely seem to follow it to the letter. Perhaps we all like to make our own mistakes, the best-learned if most painful of lessons … Horticulture as practiced among mesembophiles is an art of minute personal idiosyncrasies, not an exact science; it demands Jove and observation, not formulae. Many growers, like closet tipplers, tend to fool themselves about their actual practices: they will say that they “never” water a certain plant in summer, but in fact they give the plant frequent mists, or their spouse takes secret weekly pity on it.”

I had a good laugh to myself when I read that; his comment does not only apply to the art of growing mesembs but also to the Art of making perfumes. I am sure we can all recall of examples of our impulsive folly. Perhaps it is an evolutionary trait in humanity to test boundaries and occasionally to discover a new way by doing it “my way.”

But I digress, to get back to the fascinating subject, Most of the mesembs that I grew up with, were grown for colourful display, so I just took it for granted that none of them had any scent and I had no idea that some were actually night flowering, otherwise I would have been out there with my torch, but as Steve Hammer illuminates; 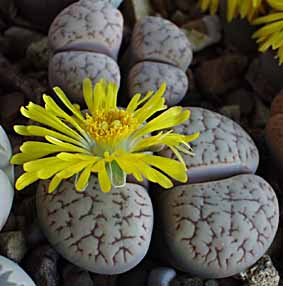 Most day-flowering mesembs have weak perfumes: those which are open before noon are rarely strongly scented. What smells is mostly pollen redolent of mealie meal. Flowers which open nearer to dusk have stronger scents. All Lithops flowers open after about 15:00 and all are scented. Related taxa can be usefully distinguished by sniffing, e.g. L. pseudotruncatella ssp. Dendritica has a sharply sweet odour far stronger than the mild, honey-like ssp. Pseudotruncatella. In genra which open at dusk or later, almost all taxa have odours, but exceptions do occur: some Hereroa species have sweet or spicy flowers; others are practically scentless, though dissection reveals no obvious differences in the nectaries.

In general, the paler the flower, the later the opening time, and the stronger the scent. The minute, white flowered Conophylum acutum is an extremely rare endemic from Bitterfontein. The petals are fused into a 20 mm long, glassy tube, hardly open at the apex: yet, when it does open (21:00 – 4:00) it emits a disproportionately powerful scent. On a windy or cold nights the flowers do not open, but then moths do not work under such conditions either. 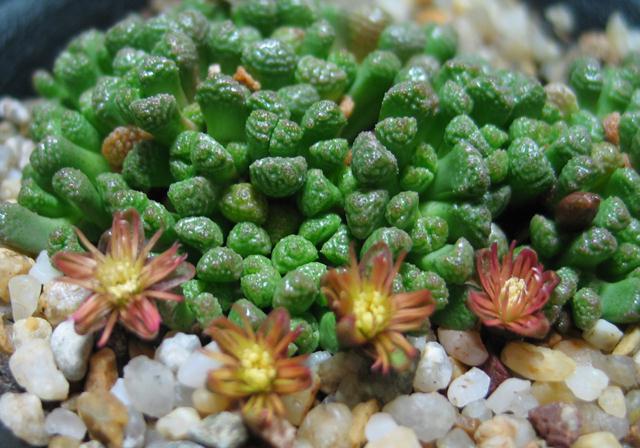 Perhaps the finest odour of all is found in Neophenricia sibbettii, a tiny cryptic plant from Fauresmith. The flowers are small, with narrow petals in a starburst, but on summer nights they a strong tropical perfume – mixture of pineapple, coconut, and something musky. On warm nights the collective scent can be detected many metres away.

One tends to associate sweet perfumes with flowers, and savoury odours with leaves or fruits. In the mesembs, this is normally the case, but we do find flowers that smell like ham or pepper, e.g. Sphalmanthus prasinus, which have colors and scents better known from kitchens and boudoirs. Ham on an off day, wood smoke, black pepper, lemon, rose, honey, cloying narcissus, calendula: easily the widest and oddest range in the family. Conophytum khamiesbergense has leaves that smell like raspberries –. Curiously, the same berried scent is found in the capsules of the monotypic genus Stayneria. It would be interesting to know what compounds are involved. Any nectars exuded by mesemb flowers are normally sugary and bland, but in some cases – Sphalmanthus again – the taste is bitter smoky. 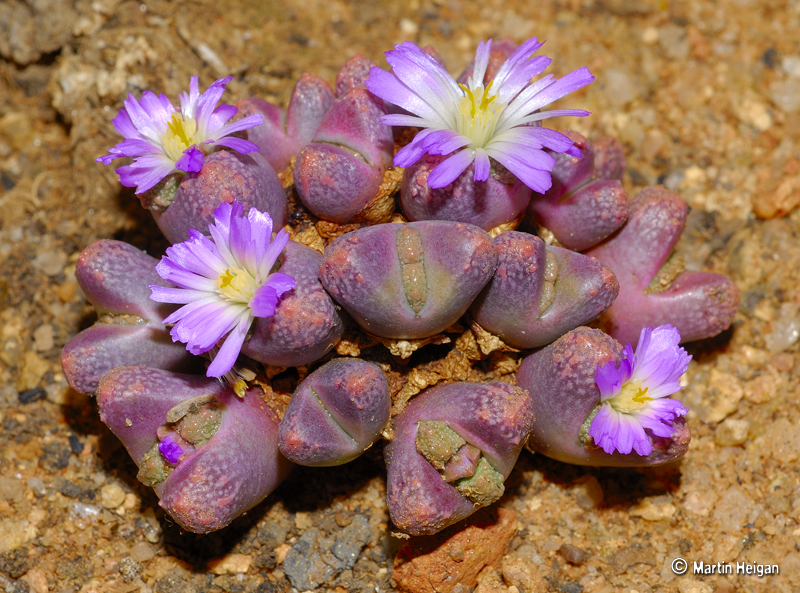 I wonder whether anyone has done any headspace analysis (Gas chromatography – GC) on the mesembs? Headspace, for those who are unfamiliar with the term, is the air above or surrounding a for example a flower, which contains volatile compounds. Any form of analytical procedure that samples and analyses this vapour is termed ‘Headspace Analysis’. The great advantage of headspace sampling is that it can be carried out relatively easily in the field with simple, portable equipment; this has opened up many exciting possibilities for the natural product chemist who can now analyze the scent of just a single flower. It is also useful to analyze the scents of flowers that lose their scents as soon as they are picked. This technique has been successfully applied to a great range of plants and flowers for fragrance analysis, pollination studies and other botanical investigations. (Ref; The Chemistry of Fragrances – Charles Sell) 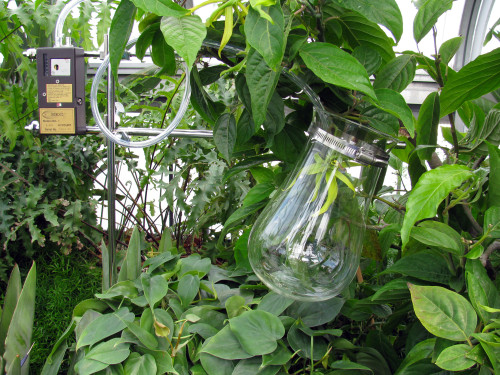 As it is often extremely difficult to identify many species, among the mesembs, it is interesting to hear how scents can help identify connections among species. 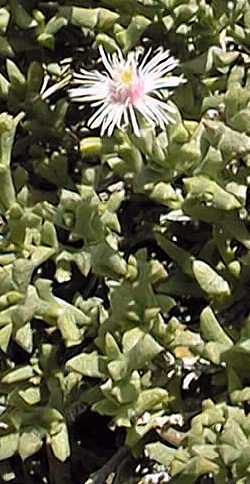 Some mesemb groups are so difficult to define that one looks for any character suggesting linkage …. The hypergenus Ruschia and its segregate, Antimima, are often difficult to separate, especially without fruits; but the leaves of Ruschia often have a unique fishy odour. N.E.Brown, the great English “mesemologist”, discovered this when a visiting cat showed a special fondness for the plant now known as R. piscodora! Antimima leaves have a “green” odour, a bit like celery, but are never piscatory. Their flowers exude a delightful whiff of buttery vanilla, never found in Ruschia.

While smelling the honeyed flowers of Psammphora modestra, I noticed that the leaves had a stronger odour – suggestive of Commiphora and cat urine! Remarkably sharp, this odour is found in only a few inland populations of P.modestra, which occur around Luderitz and east to Rooiberg in the Sperrgebiet. The inlanders are vegetatively distinct from coastal plants (the leaves and sepals are bluish and acute) but the major difference is nasal. P. “felinodora”? 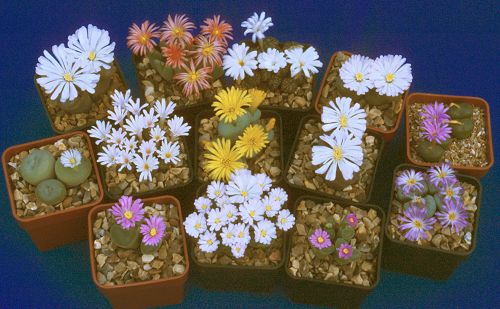 Steve Hammer’s article has certainly inspired me to go sniffing all the mesembs I come across, both leaves and flowers. Especially those small plants he recommends that should be checked very closely and the “scentless” flowers which seem not to open at all which are probably nocturnal, and very likely have a pleasant surprise for us.

Although it unlikely that we will ever get any natural extracts from these wonderful scented mesembs, they can none the less serve as inspirations for scent creations. Their unusual scents can inspire notes in perfumes that we have not thought of just like nature can inspire new designs in art, architecture, engineering and chemistry. I will not be surprised if the big fragrance companies have not already been “sniffing” around the mesembs.