It could not have been a more beautiful day for a drive out to Riebeek Kasteel. It has been raining for a couple of days and sky cleared to reveal all sparkling colours of blues and greens, perfect reflection of the blue and green oils I knew I will be smelling. 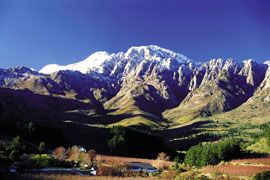 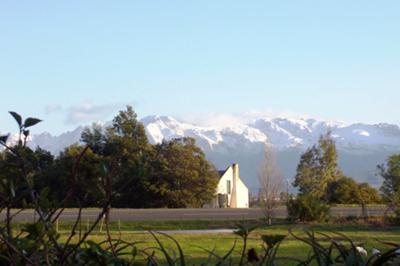 The old song echoes in my mind as I view the breathtaking blue-purple mountains with their snow capped peaks, stretching out beyond the green fields. The Western Cape is truly the corner of the earth that smiles sweetest of all to me.

The Cape Floral Kingdom is one of the six floral kingdoms of the world. Fynbos, the heath-like vegetation characteristic of the region is the most botanically rich habitat on earth. The Cape Floral Kingdom is both the smallest and the richest floral kingdom in the world, with the highest known concentration of plant species: 1 300 per 10 000 km2. It has an even higher level of plant diversity than tropical rainforests. There are over 9000 species of plants occurring in the fynbos area, of which around 6200 are endemic. The Fynbos Biome has a Mediterranean climate with winter rainfall and hot dry summers. 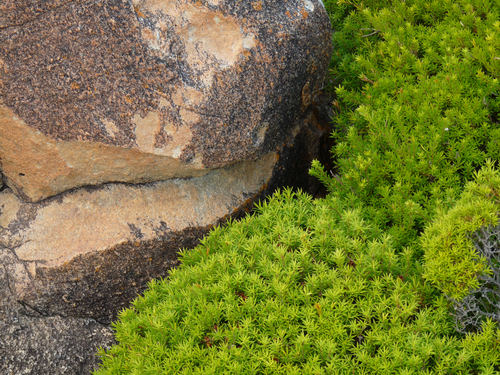 According to Gavin W. Maneveldt of the Department of Biodiversity and Conservation Biology, of the University of the Western Cape, many of the fynbos species have such a tiny range, that ploughing a field, or building a single house can wipe out the entire world population of a unique form of life. The 60 km2 of Table Mountain for example, alone supports 1 470 species.

An important part of conserving the fynbos is educating the public; this is what Werner is passionate about. I met Werner Bester when I was looking for a distiller for Omumbiri and it was indeed Werner who built the still for the Omumbiri in Namibia. Werner Bester and S’andor Kocsis started the Still Pure essential oils brand in 2005 as a natural progression from their company’s two original focuses; supplying farmers with essential oil plants and information, and custom designing and building distillation machines for the budding essential oil industry. They support farmers from all over South Africa and also other parts of Africa. Apart from growing indigenous fynbos essential oil plants, the Western Cape is also suited to grow Mediterranean plants such as many varieties of lavender, thyme, lemon balm, and rosemary.

On my way to the nursery which is situated in the Noord Agter Paarl, I notice Eriocephalus africanus in bloom everywhere, interspersed with the bright yellow heads of suurings (Oxalis pes-caprae). Suurings are traditionally used as an ingredient for waterblommetjie stew. Children also love eating them. I remember as a child brewing “suuring beer”. It did not taste very good, but for me a magic thing happened; the brew turned bright red overnight. The wonder I felt as a child has not diminished for me through the years. Even after all the years of working with nature’s bounty, plants still delights me with unexpected magic.

It was with that feeling of wonder that I gazed over the large variety of scented plants in the nursery. From the nursery they supply tested essential oil plants I brought with me a few cuttings of my Pelargonium quercifolium. I have read that an oil is made from it but have been unable to source any. The plant has a scent reminiscent of Frankincense and Labdanum combined. Sill Pure already has available on the market a mint and lemom scented Pelargonium oil from Pelargonium tomentosum and P. citronellum respectively. They also have in the pipeline distillations from a pineapple scented Pelargonium cv. Brilliant and P. crispum. Werner shows me the P. crispum. It is often listed as lemon scented, but the leaves rather have a delightful fresh green spiced scent to my nose. It will certainly be an oil that I would like to use.

Werner has done many test batches with various scented Pelargoniums. “Often,” he says, “the yield is so low that you only get a few drops.” “We have tried to distill Rooibos but did not even get a drop of oil. Then there is also the difficulty of getting a new oil registered. Many of our indigenous plants has the potential for essential oil production, but due to the huge costs involved in registration, it never reach the market. Sadly, the government has not made any funds available for the registration of new oils. Often, big international companies register our indigenous plants and then has claim on it. Instead of benefitting our local industry, it then becomes lost to us.”

This I have heard from numerous local oil producers, as well as stories of international companies coming out here, use our plants for analysis and then simply reproducing it synthetically. I asked Werner when the first essential oils were produced in South Africa. “At least for 60 or 70 years. For many years we only exported, for example, Buchu leaves and which was vacuum distilled overseas at huge cost. A myth existed that Buchu could only be vacuum distilled. When South Africa started to produce Buchu oil locally, blend tests conducted confirmed that the oil produced locally was as good if not better than that produced with vacuum distillation, at a fraction of the costs of vacuum distillation.” 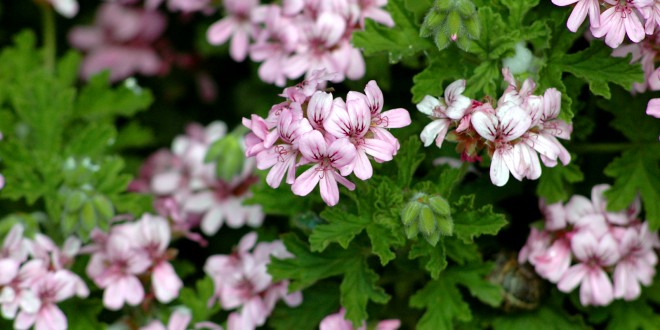 Werner points out the “Rose Geranium” to me. “Rose geranium” is of course the best known of all the Pelargoniums and a subject of heated debate. The best oil comes from the Bourbon cultivar and generally it is said that Reunion produces the best oil. The actual botanical name of the Boubon cultivar is still in itself debatable. Botanical expert Demarne and Van der Walt determined in 1989 that geranium Bourbon oil originating from the island of Reunion is produced from the leaves of a hybrid of P. captatum and P. radens. The Bourbon cultivar is usually identified as Pelargonium graveolens cv. Rose, but is also known as Pelargonium roseum asperum cv. Bourbon. “The higher up in the mountain the better the quality of oil, “ Werner explains to me, “some of the locally produced  rose geranium oils are on par with the oils produced in Reunion.”

According to U.A. Dasuki from the Department of Biology, Bandung Institute of Technology, Jalan Ganesha, Indonesia:” Nearly all cultivars of Pelargonium grown for their rose-scented essential oil, called geranium oil, arose in Europe from crossings between introductions from South Africa and are therefore of hybrid origin. Commercial cultivation began in the early 19th Century in Grasse, France. Grasse remained the main centre of production until the Second World War. As a result of a change in the economic climate, cultivation there has ceased. The production of Pelargonium Rosat Group became important in Algeria, Morocco and Réunion, using plants from Grasse, but after increasing steadily for some time, production declined. The most important producers of geranium are currently China, Egypt, Morocco and Réunion, but extensive industries of local importance exist in India and the Crimea Peninsula, the Caucasus and Tajikistan.In Kenya independent introductions of Pelargonium from South Africa (or possibly via India) led to the development of the ‘Mawah oil’ industry in the early 20th Century. The industry all but ceased during the Second World War. After the war a new industry was built up using plant material from Réunion. The odour of the oil produced was intermediate between the original Mawah oil and Réunion geranium oil. Production of this oil virtually stopped after Kenya gained independence in 1963.”
http://database.prota.org/PROTAhtml/Pelargonium%20Rosat%20Group_En.htm

Before we drive out to the home of Still Pure, Werner lets me sample a few oils that he keeps at his. My fingers itches to get hold of the container with its precious vials of oils. He brings out Cape Snowbush – Eriocephalus africanus. I am surprised at the scent; it smells nothing like the others I have sampled. They managed to capture the scent of the fresh flowering herb in the oil, which I found the other samples I tested lacked.

“It is about four years old, they definitely improve with age.” Still, some of the Eriocephalus africanus oils that I have are over two years old and does not smell like that. “Many distillers do not get the timing right for harvesting. Some of the indigenous oils have a very short window of time for harvesting. Eriocephalus  punctulatus (Cape Chamomile) has an especially short time frame between flowering and when it forms seeds,” Werner informs me, “Oils can vary greatly even from farm to farm in the same area. “ The particular oil that I was smelling came from a farm in Malmesbury. 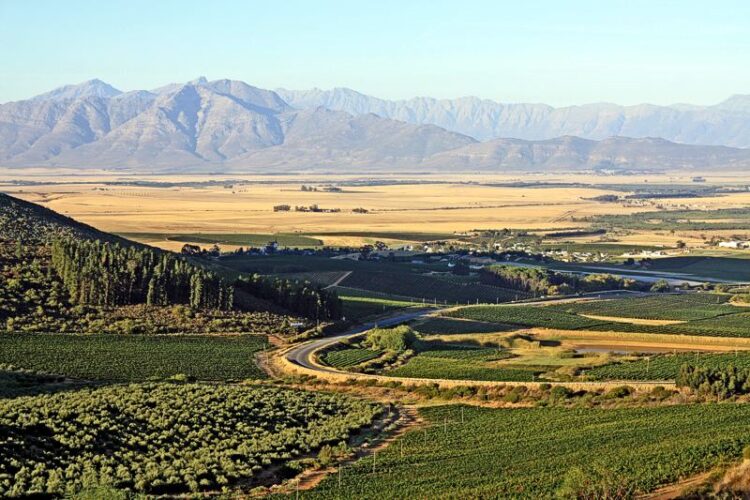 Still Pure distributes their oils from Riebeek Kasteel which is one of the oldest towns in South Africa and perhaps also one of the most beautiful towns. In recent years it has become an oasis to writers, and painters. It is also famous for its olives and Shiraz red wines.

It is indeed with the rose the geranium oil that one can especially see how tricky the aspect of quality control is in dealing with the oils. They let me smell rose geraniums from 3 different farms. The odour can change dramatically during flowering, it becomes rosy during flowering, whilst minty at other times. The chemical composition is variable due to the difference in cultivars used, the climate (including sunlight, rainfall and temperature), and the time of harvest. “If you want to pick a rose geranium oil, you have to smell all the different oils and pick the one from the particular farm it comes from, “S’andor advices me.

I question Werner and S’andor on the popularity of the indigenous oils. The most popular indigenous oil is Eriocephalus punctulatus. About 80%-85% of Buchu oil is bought by international food flavouring companies for extraction of pseudo-diosfenool, diosfenool en merkapto-mentoon-8-3-p-1 used mainly for blackcurrent flavouring. In general there are little demand for indigenous South African oils. This surprises me as I am especially fond of the local oils. My particular favourite is Coleonema album (Confetti bush/Cape May). Both of my best selling perfumes contains it. Perhaps our local oils just need more publicity?

I would have liked to take a much slower exploration but there were so many oils to smell and I am not one to let an opportunity go by to educate my nose. However, before long I was getting high on the smells and I could not even remember the name for Patchouli. I even forgot to ask to smell the Blue Cypress Oil that S’andor pointed out to me. The subject of the hazards of prolonged exposure to the fumes comes up; S’andor mentions that Tea Tree distillers loses their teeth after many years of exposure. Customers arrive and all too soon it is time for my journey back. S’andor suggests I come back for a more leisurely visit to discuss the oils and their possible future uses over a glass of Riebeek Kasteel’s famous Shiraz.

Back home I have a chance to evaluate some of the oils I was given to sample. It never cease to amaze me how different the oil from the same plant can smell from different distillers. The Still Pure oils are of the best quality I have come across. They manage to capture notes in their oils that I have not found in other samples I smelled. After smelling their Eriocephalus africanus I decided to give up my experiment with the enfleurage of fresh flowering plant material as there it was in their oil; the notes I was trying to capture. I am left wondering  whether perhaps the reason that the local South African indigenous oils are not that popular is because most people only sample the oils once from one distiller and decide they do not like the scent based on one testing.